“Exists” is a found footage horror film directed by Eduardo Sánchez and written by Jamie Nash. The film follows a group of friends who spend a weekend in a cabin in the remote Texas woods to party and film extreme-biking—until they have a run-in with Bigfoot.

Exists opens with footage of five friends driving at night in the back roads of Texas. The group are en route to a fun-filled weekend at a remote cabin in the woods when their car suddenly hits something on the side of the road. Concerned as to what just happened, the driver, Matt (Samuel Davis), pulls the car over. Everyone looks around for whatever it was that they just struck. The group finds damage to the car’s front grill along with splatters of blood and tufts of hair, but there are no animal remains to be found. Finding nothing noteworthy, the group continue on their way.

Don’t lulled into the preconceived notion that Exists is just another Bigfoot movie.

Matt’s brother Brian (Chris Osborn) reviews footage on a camcorder that was recording when the accident took place and sees what he believes to be a blurry image of a large animal, but the rest of the group shrug it off to his imagination. Later that evening the group arrive at the run down cabin, which is owned by Brian and Matt’s uncle. The dilapidated cabin is a far cry from the inviting and hospitable accommodations that everyone is expecting.

After a good night’s sleep (in their car) the group start their fun filled weekend. Their first day is highlighted with the group taking turns riding their bicycles off a dirt ramp down a steep drop into a nearby lake. Brian films everything with waterproof video cameras he mounts on the bicycles and helmets.

All the while, the group hears an unworldly howling deep in the woods that escalates in frequency and intensity throughout their stay. The band of friends feel like they are being watched by something. Is the group’s imagination getting the best of them or is there something evil lurking just out of site in the remote Texas woods? 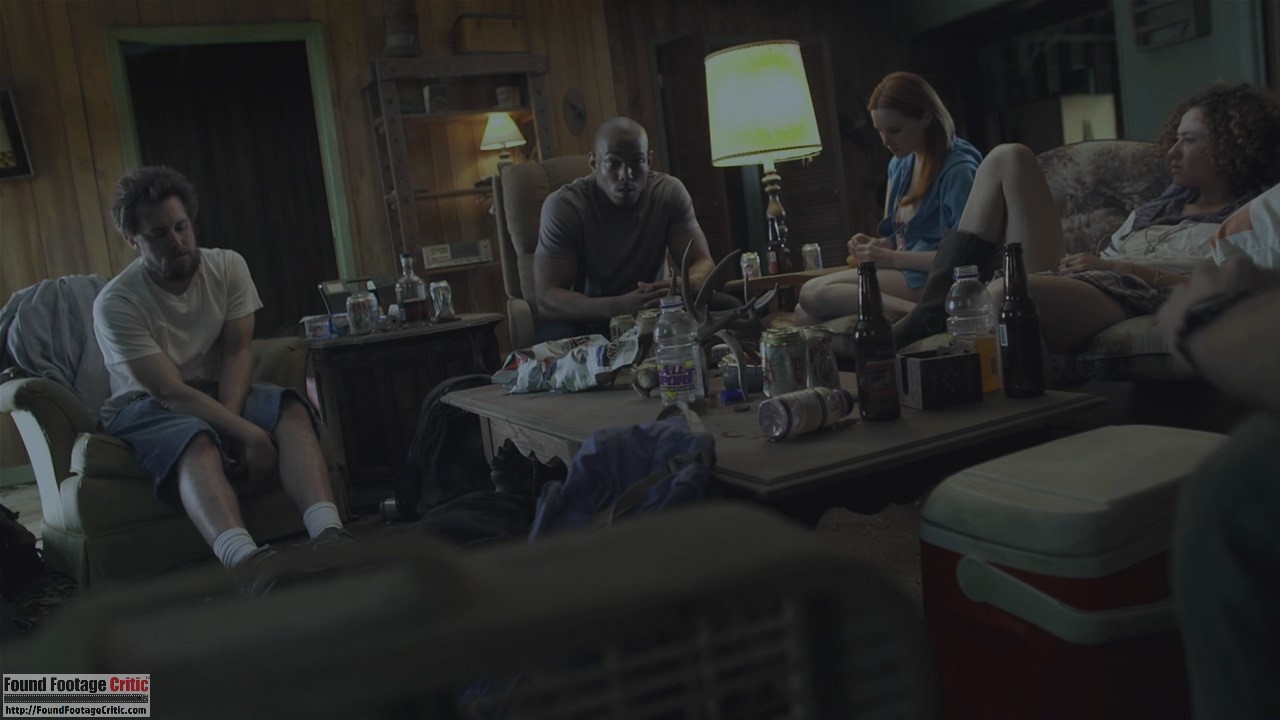 Most of the footage is organically captured with body mounted (and bike mounted) video cameras, avoiding the inevitable found footage question, “Why are you still filming?”

Exists also takes the time to allow the characters review footage they’ve captured—an obvious means for character’s to validate that what they claim to have seen is real (versus their imagination). Even to this day, most found footage films neglect to utilize this simple approach to enable characters to prove that what they saw really happened.

Exists contains one particular sequence that is reminiscent of the V/H/S/2 (2013), “A Ride in the Park” segment—which is also a collaborative effort of Eduardo Sánchez and Jamie Nash. The scene in question is shot from the perspective of a bicyclist wearing a head mounted camera while riding in the woods. The POV footage (in both films) is high energy, visually interesting, and offers a welcome contrast to filming the characters hiking through the woods.

The creature effects are beyond reproach for a Bigfoot film. Eduardo Sánchez does an exceptional job revealing fleeting glimpses of the creature and offering residual evidence of Bigfoot early-on in the film. He effectively creates tension through what is not presented.on-screen. As the film progresses, Eduardo Sánchez incrementally reveals more of the creature right through to the climactic ending. The filming reasons employed in Exists work well and rarely raise the question as to why the cameras are rolling. Since the characters often wear body mounted cameras on their bicycles and helmets, much of the footage captured throughout the film comes across as organic. During scenes where the characters are stressed or are in danger, the continued filming is rarely questioned since the mounted video cameras are recording on their own.

Character Brian also mounts several cameras outside, serving as ad hoc surveillance cameras used to monitor the perimeter of the cabin. Eduardo Sánchez justifies the use of the handheld video cameras at night during particularly dangerous situations by having the characters use the night vision as a light source. The characters need to see at night, but want to avoid using flashlights so not to be seen by Bigfoot. Additionally, the character dialog sound as though the actors are wearing mics,which is not an approach typically used in a pure found footage film. The volume and clarity of the character’s voices should increase and decrease as they move towards and away from the video camera. Just to be clear, if we were reviewing Exists from the lense of a traditional narrative shot film, the audio is beautifully captured and blends perfectly with the tone and cadence of the film. While these divergences from the found footage conceit should not impact the overall enjoyment of Exists, some found footage purists may take exception. The acting in Exists is exceptional. Chris Osborn performs exceptionally as Brian, a gadget geek who relates more to his video equipment than with people. He spends most of the film living vicariously through others through the (many) lenses of his (many) video cameras. Samuel Davis does a great job as Brian’s brother Matt. Unlike his brother, Matt is portrayed as outgoing and athletic. Samuel Davis also stars in the horror film, Cabin Fever (2016).

Dora Madison is stellar as Matt’s girlfriend, Dora. She admirably portrays a woman descending into withdrawal as the unlikely events of the film unfold. Among Dora Madison’s TV credits are recurring roles in Dexter (2013) and Friday Night Lights (2009).

Roger Edward’s performance as Todd is outstanding. From very early on Roger is the defacto leader of the group, taking on the alpha role as the plot reaches its crescendo. Denise Williamson does a good job.as Roger’s girlfriend Elizabeth. Also appearing in the film (in voice only) is Stefanie Sánchez, who plays the 911 operator—She is married to director Eduardo Sánchez.

Last and certainly not least is Brian Steele who plays Bigfoot. It turns out that Brian Steele is a verteran at portraying Bigfoot, having played the creature in the TV series Harry and the Hendersons (1993). Brian Steele has a long career as a creature performer—some of his more noteworthy films include Predators (2010), Terminator Salvation (2009), Hellboy (2004), and Men in Black (2002). He also worked on the creature movement in Paranormal Activity 5: The Marked Ones (2014). Exists begs us to consider the question: Who is the true monster—humanity or Bigfoot?

While the surface plot of Exists shares similarities to many Bigfoot incarnations that came before it, the film distinguishes itself through Eduardo Sánchez’s portrayal of Bigfoot. Unlike other renditions of the mythical beast, Eduardo Sánchez humanizes the creature in Exists. He brings to life a version of Bigfoot that is both physically threatening yet something (or someone) with which an audience can ultimately empathize with.

The climactic ending of the film reveals a plot point designed to generate sympathy for the creature and provide closure to the story. Don’t lulled into preconceived notions that Exists is just another Bigfoot movie. The film has story to tell that is very thoughtfully written (kudos to writer Jamie Nash). We come to learn that not everything in this film is as it appears to be. In the end, and through the story’s thought provoking irony, Exists begs us to consider the question: Who is the true monster—humanity or Bigfoot? For five friends, it was a chance for a summer getaway- a weekend of camping in the Texas Big Thicket. But visions of a carefree vacation are shattered with an accident on a dark and desolate country road. In the wake of the accident, a bloodcurdling force of nature is unleashed-something not exactly human, but not completely animal- an urban legend come to terrifying life...and seeking murderous revenge.

EXISTS is the hands down the best Bigfoot film ever made, found footage or otherwise. If you're a Bigfoot fan (or believer) and haven't seen this film, you're missing out!
8.8