Paranormal Activity 3 is a found footage horror paranormal film directed by Henry Joost and Ariel Schulman and written by Christopher Landon. The film is the third installment in the Paranormal Activity franchise based on the original film by Oren Peli.

Paranormal Activity 3 opens with a series of time jumps, starting in 2005, where Katie (Katie Featherston) drops off a box of VHS tapes for storage in Kristi’s (Sprague Grayden) basement. Next, the film transitions to 2006, with the opening scene from Paranormal Activity 2 (2010) where Kristi’s house is ransacked. New footage is introduced to that scene where her husband Daniel (Brian Boland) discovers that the box of VHS tapes is missing.

Finally, the story jumps to 1988, where we are introduced to a much younger Kristi (Jessica Tyler Brown) and Katie (Chloe Csengery). It is Kristi’s birthday and her mother Julie (Lauren Bittner) and father (Christopher Nicholas Smith) prepare for her party.

During the ensuing days after Kristi’s birthday party, Dennis and Jule observe strange phenomena taking place throughout their home. The couple hears strange noises and objects seem to move on their own accord.

One evening while Dennis and Julie are filming a personal sex tape in their bedroom, an earthquake hits. During the earthquake, the still-recording video camera captures falling dust that outlines what appears to be a ghostly apparition in their bedroom. A completely intrigued Dennis sets up video cameras throughout the house in an effort to figure out what is happening in his home.

The surveillance footage captured by Dennis reveals that Kristi is the nexus for the strange occurrences in their house. What happens next shocks and frightens the young couple and threatens to tear their family apart. Dennis (Christopher Nicholas Smith) is a wedding videographer who converted his garage into a video editing studio for work. His profession as a videographer and access to equipment provides the impetus for much of the filming that takes place throughout the film. The moment Dennis glimpses the ghostly apparition during the earthquake, his motivation for filming everything is equally as strong as Micah’s obsession in the original Paranormal Activity (2007).

While the filming reason is generally strong in Paranormal Activity 3, the film includes one extended scene that takes place in another house that questions plausibility. During this particular scene, Dennis is under extreme stress and in danger, causing this reviewer to question why he continues to film. Paranormal Activity 3 is the third film in a major theatrically released Hollywood franchise. In order to appeal to the broadest possible audience and look aesthetically pleasing on a large screen, shooting in 16:9 aspect ratio was more likely a business decision rather than a preferred creative direction. Setting aside this one digression, the found footage cinematography is exceptional.

Dennis is a professional wedding videographer and has a full editing studio in his garage. As such, he is expected to have a strong knowledge on cinematography and can readily access the equipment needed to film.

Dennis’s makeshift panning surveillance camera constructed from the base of an oscillating house fan is ingenious. This unique camera mount enables Dennis to film a large area of the first floor of his house using a single camera. Further, the panning motion of the camera adds tension as viewers eagerly wait to see what will come into view as the camera sweeps across the room. The found footage purity in Paranormal Activity 3 is very good. The video captured throughout the film is convincing as actual footage that could have conceivably been found and subsequently stitched together as a feature film.  The film uses CGI very sparingly and subtly, ensuring Paranormal Activity 3 maintains its found footage conceit. Further, similar to its predecessors, the third installment in the franchise forgoes an opening title card, helping to carry the illusion of actual found footage. The acting in Paranormal Activity 3 is very good and even, as is the case with each of the Paranormal Activity films in the franchise. Christopher Nicholas Smith as Dennis performs exceptionally as the main protagonist, concerned father, protective husband, and inquisitive filmmaker. Dennis shares the same obsessive spark as Micah in the original Paranormal Activity (2007). Lauren Bittner does a good job playing Julie, who shares her husband’s curiosity over the strange phenomena taking place in her home.

Jessica Tyler Brown as Kristi and Chloe Csengery as Katie convincingly play the younger versions of their adult counterparts Sprague Grayden and Katie Featherston, respectively. Here, Kristi is portrayed as a young child under the influence of an unseen evil entity, while her sister Katie is at first terrified but later seems to also fall under the spell of this ephemeral being. 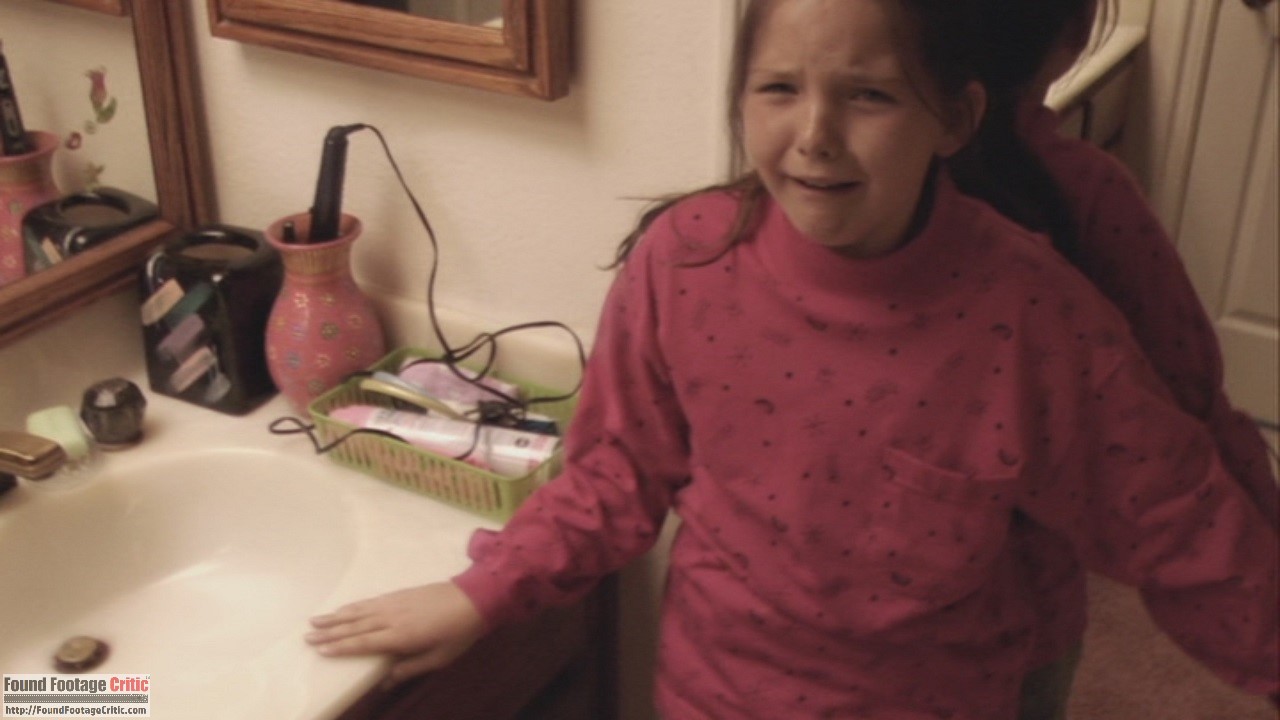 Paranormal Activity 3 continues the intricate plot threads woven through the first two films in the franchise. Some viewers may find the frequent time jumps between and within the films confusing at times. The film even makes a reference to the film Back to the Future (1985) during a conversation between Dennis and Randy, which can be interpreted as a self-referential joke.

Embedded within that static in the last scene of the film is a single frame easter egg of Dennis’s and Julie’s bed on fire. This image may explain the house fire that adult Katie and Kristi make reference to in earlier films. The image is included below as the last screenshot in this review. In 1988, in California, cinematographer Dennis moves to the house of his girlfriend Julie to raise a family with her daughters Katie and Kristi. Little Kristi has an imaginary friend named Toby while weird things happen in the house. Dennis decides to place cameras in the house to capture images during the night and soon he finds that there is an entity in the house. Dennis's friend Randy Rosen (Dustin Ingram) researches the events and learns that his house might be a coven of witches and the children may be in danger.

PARANORMAL ACTIVITY 3 is the third installment in the Paranormal Activity franchise. The film has good acting, some great jump scares, and is a worthy addition to the series.
8.3